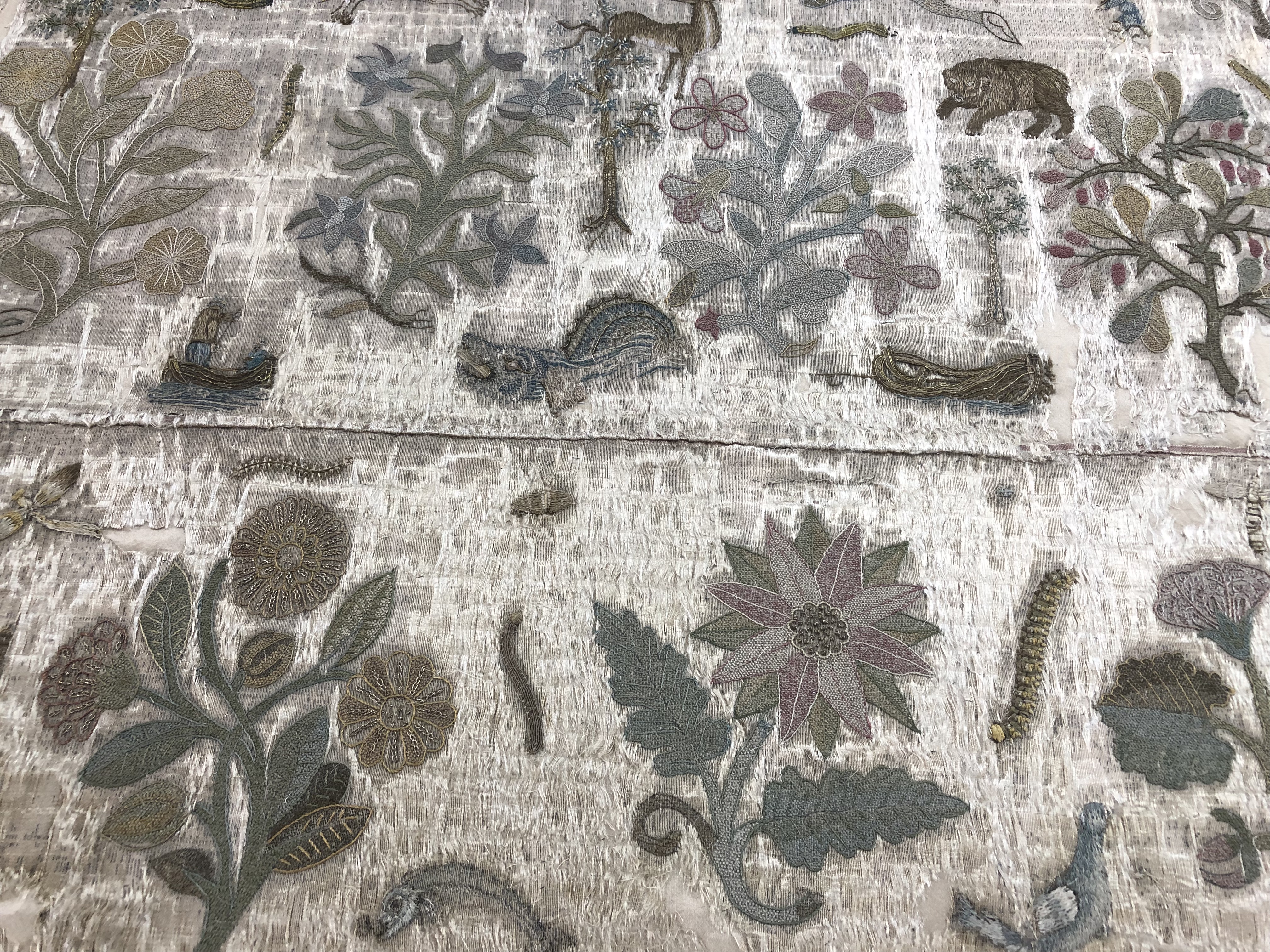 Occasionally, an incredible discovery of historic significance occurs. Such is the case with the Bacton Altar Cloth, now believed to be part of a lost dress from Elizabeth I’s wardrobe. This item is not just rare – it is unique. For although accessories belonging to Elizabeth have survived, no single item of her clothing is known to have done so. On 12 October 2019, the fragment of dress, which at some point was converted into an altar cloth, will go on display at Hampton Court Palace. In this blog, we explore its likely provenance and just what features of the fabric have convinced experts that it once belonged to one of England’s most iconic queens.

The Discovery of the Lost Dress of Elizabeth I

The story of the discovery of the lost dress reminds me a little of my ‘rediscovery’ of the Anne of Cleves’ panels. In the same way, it was a chance discovery made during a casual search of the internet. Eleri Lynn, the curator of the Royal Ceremonial Dress Collection at Historic Royal Palaces came across a photo of the Bacton Altar Cloth online, while researching a book she was in the process of writing. The fabric was framed and on display in St Faith’s Church, Bacton, in Herefordshire. It appeared to be old, dating possibly from the late sixteenth century, circa the 1590s. That was enough to convince Eleri that closer inspection was called for.

From the first moment she laid eyes on it, Eleri knew it was something special and, with the blessing of the parishioners of St Faith’s, the altar cloth was brought back to the conservation workshops at Hampton Court for further research. Over 1000 hours of conservation work later, the cloth has been saved from a perilous state of degradation. At the same time, a huge amount of research has been done to establish the fabric’s likely provenance.

The Making of a Royal Gown?

The silk ground of the fabric is cloth of silver. This means that the precious metal was beaten into fine threads and included in the weave of the fabric. Such material was outrageously expensive and would have cost the equivalent of a substantial house at the time. Imagine: the effect of the silver thread was to catch the light, causing the fabric to shimmer and its wearer to stand out in the crowd.

Sumptuary laws of the sixteenth-century restricted the use of cloth of silver and gold to the highest echelons of the aristocracy and the immediate royal family. For the team researching the cloth, this significantly narrowed down the potential pool of owners.

Furthermore, by the end of the sixteenth century, when it is believed that this cloth was produced, Elizabeth was jealous of the younger women at court and ferociously protective of the attention from her male courtiers. Her ladies were severely admonished, and sometimes publicly humiliated, should they foolishly be bold enough to try and outshine the queen. To be a noblewoman, and to dare to wear a sumptuous garment at court, like the one in question, would be to risk Elizabeth’s wrath. Eleri believes that this circumstantial evidence adds even more weight to the garment’s likely royal provenance.

The Lost Dress: A Rich and Costly Garment

The fabric is stitched with the finest embroidery of dyed silks, silver and gold thread. Fascinatingly, the team at HRP have established two different ‘hands’ at work on the textile. The original embroidery depicts patterns of flowers and plants well known to Elizabethans, including species that we are less familiar with today, such as the medlar pear.

They have also been able to identify where the patterns embroidered onto the dress originated: ‘Les Clefs du Champs’ [The Key to the Fields], published in 1586. This was a very popular book at court during the later sixteenth century. Eleri describes the stitching as exquisite and the finest she had ever seen. There was no doubt that was executed by a professional embroiderer, who was almost certainly a man (or men from within the same workshop). This dress was a work of art, a little like a Holbein, but in textile.

The second ‘hand’ is believed to have been any number of noblewomen at court, who latterly ‘customised’ the dress by including a wide range of smaller motifs such as birds, caterpillars and even sea-creatures! The stitching, while impressive, is not of the same quality as the aforementioned decoration. Remarkably, Eleri and the team have found the exact book from which these patterns have been taken. It is called ‘Four-Legged Animals’ by Nicolas de Bruyn, a copy of which will appear in the exhibition, alongside the cloth.

There is one more astonishing feature that is utterly unique to this cloth: the embroidery has been done directly through the cloth of silver. This was unheard of at the time. The risk of ruining the fabric if a mistake was made was too costly to justify. The safer method was to create the motif on linen or canvas and then appliqué it onto the fine fabric. The person or persons responsible for the creation of this fabric must have been extraordinarily accomplished – and confident in their abilities.

Whilst the outer surface of the cloth has been faded by the effects of light, the inner surface more accurately reveals the true colours of the original dyes used in the embroidery. These dyes have since been subject to analysis. The results showed that most were natural dyes, commonly available at the time, with the exception of one of the red dyes, which was derived from the South American cochineal: an insect from which carmine dye is extracted. While this dye is commonly used today in things like cosmetics and food dyes, in the sixteenth century, when the new world had just been discovered, it was both novel and expensive.

But how do we know that the altar cloth was once a dress? The clue here lies in the obvious pattern-cutting, which is evident to the trained eye. This points towards the fabric once being an item of clothing. So, these factors, when taken together, all stack up to provide persuasive evidence that the original garment could only have been an item of court dress, dating from the 1590s, and almost certainly belonged to one person – Elizabeth I.

From Court Dress to Altar Cloth

While no-one can conclusively prove how this fabric went from courtly dress to altar cloth, there is a possible chain of provenance which centres on one of Elizabeth’s gentlewomen: Blanche Parry.

Blanche had cared for Elizabeth from her birth, rocking the cradle of the new princess when she herself was in her mid-late 20s. Alongside Kat Ashely, Blanche was one of Elizabeth’s closest confidantes and was possibly like a second mother to the young Elizabeth. She would serve the princess, and later queen, faithfully through the highs and lows of Elizabeth’s life. She was almost certainly with the princess during her dark days of despair as a prisoner in the Tower and remained by her side through the golden age of Elizabeth’s reign.

After Kat Ashley’s death, in 1565, Blanche was appointed as Chief Gentlewoman of the Bedchamber, the most influential of positions in Elizabeth’s household. She controlled access to the queen and was also in charge of Elizabeth’s jewels and wardrobe. We know that many gifts were bestowed on Blanche, including items of clothing. Blanche died in February 1590, but was this dress a gift from the queen, right at the end of her life?

The tantalising link lies in the fact that the altar cloth has long been in the possession of Blanche Parry’s parish church in Herefordshire. She was born at Newcourt in the village of Bacton and her empty tomb (with monument) in the Church of St Faith’s attests to her affiliation with the place of her birth. So, the question remains: was this a treasured gift, which at some point was generously donated by Blanche, or her descendants, to be made into this most sacred of items? Is the Bacton Altar Cloth an enduring memento of two extraordinary lives entwined almost entirely from cradle to grave? That’s for you to decide!

If you wish to see the Bacton Altar Cloth, Elizabeth I’s lost dress, for yourself, a special exhibition featuring the cloth will be opened to the public on 12 October (2019) at Hampton Court. Alongside the cloth, other precious items will be on display. These include The Rainbow Portrait of Elizabeth (on loan from Hatfield House), in which the queen is wearing a gown whose bodice is made of a fabric that is tantalisingly similar to the Bacton specimen. The exhibition will be open until next February (2020). So you have just four months to see this utterly unique, precious and historic artefact for yourself. Don’t miss out if you can possibly make it!

For further visitor information on the Lost Dress of Elizabeth I, follow this link to the Historic Royal Palaces website.

5 thoughts on “The Lost Dress of Elizabeth I: The Bacton Altar Cloth”