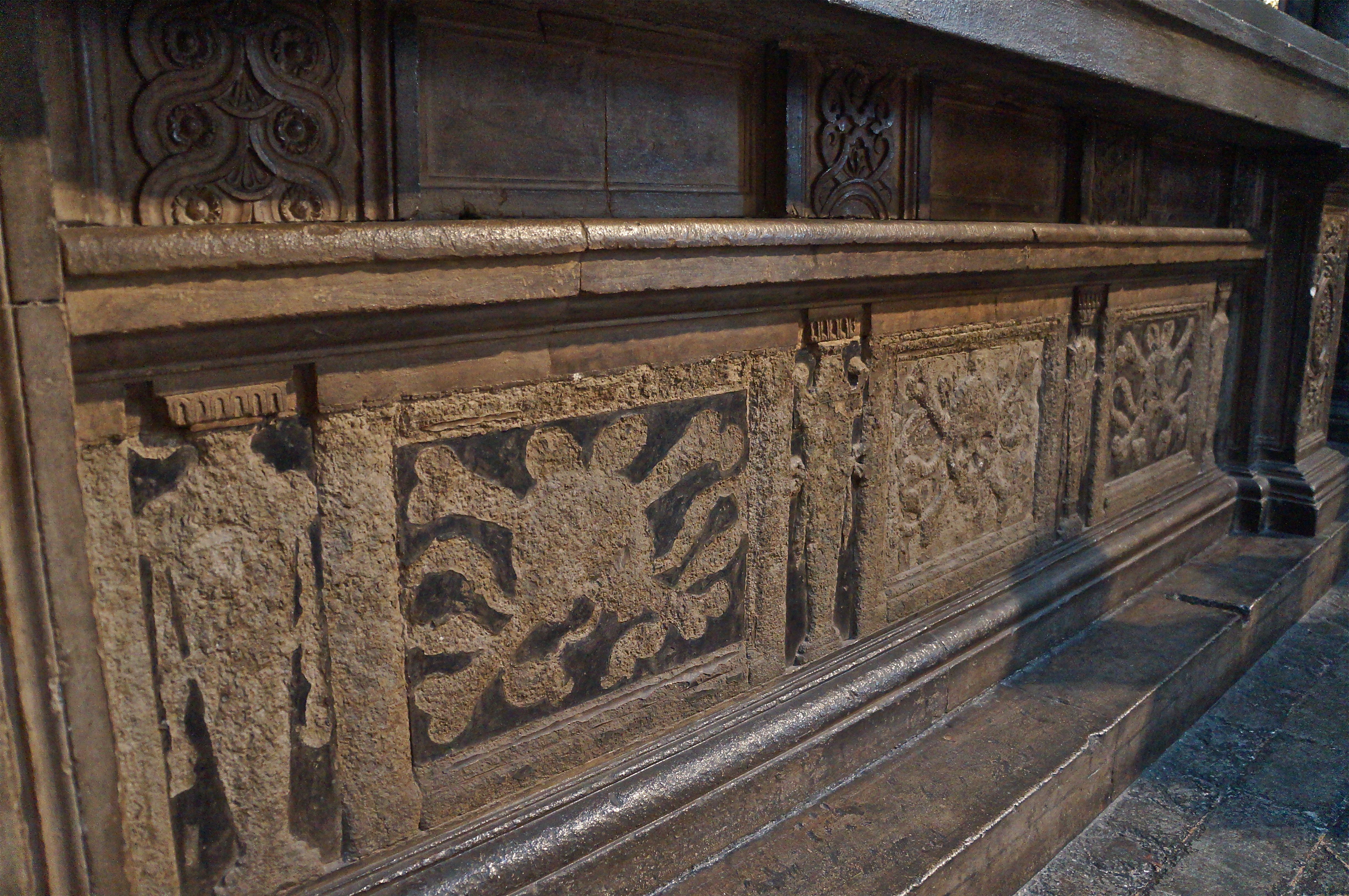 At the time of writing the book, we had strong evidence that these panels were contemporary to Anne of Cleves’ lifetime, and had once adorned her personal domestic environment. And yet, we could not be absolutely sure. We were missing one last vital piece of evidence. This evidence was dendrochronology – the dating of the wood itself.

On the Trail of The Anne of Cleves’ Panels

At the time of publication, we had not been able to take a sample from the panel. This final bit of evidence was crucial and would decide if the panels were fakes or precious national treasures. However, eventually, circumstances allowed us to put the panels to that final test.

For the first time, I am revealing the results of that test. Hold on tight while I take you on a rollercoaster of a ride! For those unfamiliar with the story, I will recap the unbelievable twists and turns before revealing the missing piece of the jigsaw.

During the course of my research into the early life of Anne of Cleves for In the Footsteps of the Six Wives, I came across a chance mention of a set of carved, oak panels, currently in situ in St Leonard’s Church, Old Warden, Bedfordshire. Scanty references and the odd photo from previous amateur time travellers had been logged online, along with the tantalising reference that these panels had been salvaged from ‘Anne of Cleves’ chapel in Bruges’.

Pevsner had dismissed the claim outright, stating in his book, Buildings of England: Bedfordshire, Huntingdon and Peterborough (p.131), ‘What has Anne of Cleves got to do with Bruges?’; I knew the answer to that question and was too intrigued to let the statement pass me by without further investigation.

I had hoped that the panels and the mythology surrounding them would lead me to Anne of Cleves’ lodgings as she passed through the city of Bruges. To cut that long story short, it turned out to be a red herring. Ultimately, we would conclude the panels had nothing to do with Bruges. However, as it turned out, fact was more interesting than fiction!

Researching The Anne of Cleves’ Panels

I quickly made contact with a local historian, Christine Hill who had a particular interest in Old Warden and its nineteenth-century squire, Lord Ongley. Through Christine, I learnt of how the eccentric English gentleman had apparently salvaged the carvings from the continent, and that the set of twenty-two panels of three separate designs (see images above; the carved initials, ‘AC’, surmounted by a ducal crown, the ‘spoked wheel, which we identified as being the heraldic emblem for the Duchy of Kleve and the lion’s head) had been examined over the last 130 or so years by various professional and amateur commentators alike.

Over and above Pevsner’s outright dismissal, disparate conclusions had been drawn about their origins, with France, the Low Countries and England all being variously mentioned as the country of origin, whilst the dating of The Anne of Cleves Panels ranged from the sixteenth and eighteenth centuries to nineteenth-century replicas. I couldn’t help but think of Churchill’s phrase; it seems we had a ‘riddle wrapped in an enigma’ on our hands.

It was fast becoming clear to me that enthusiasm alone would not unlock the secrets of the carvings. We needed to bring to bear all the latest scientific and historical expertise if we were to have a hope of getting to the bottom of the mystery.

Whilst pondering how to bring this about, we had a breakthrough. Christine uncovered the fact that the three different designs on the panels were identical to those oval cartouches carved into Anne of Cleve’s tomb in Westminster Abbey (see above). As far as we know, this connection had been lost to living memory, and for the first time, we were able to sweep conjecture aside. There was now no doubt that these carved panels were directly related to England’s queen.

It was a significant breakthrough, but by this time, I knew one thing for sure – we were way out of our depth! With this in mind, I contacted Jonathan Foyle, experienced architectural historian and ex-curator of Hampton Court Palace. I needed to know the origins of the carvings; were they contemporary or copies? Jonathan’s interest was piqued. A carved interior with unqualified provenance was definitely his kind of problem.

The team, which now included Helen Hughes, a specialist in the forensics of early historic decoration, arrived at the church on one rainy, March morning in 2015. We were nervously expectant as Helen donned her magnifying glasses in order to identify, and scrape away, tiny deposits of ‘grunge’ from the panels. We hoped that these samples would contain microscopic flecks of paint consistent with pigments used in the sixteenth century. At the same time, Jonathan pored over the visual evidence.

Disappointingly, initial results indicated that The Anne of Cleves Panels looked to be later copies; the wood was too fresh and there was no sign of the paint pigments that would have indicated a sixteenth-century origin. For a time, our quest seemed to be at an end, and we reluctantly concluded that they must have been revivalist copies, made for an eccentric English gentleman, who had more than a passing interest in Tudor history.

Then, no more than eight weeks later, a second synchronicity occurred – and it changed everything as it caused us fundamentally to question our original findings. A separate, single panel came up for auction at Bonhams in May 2015. The panel was identical to one of the designs in St Leonard’s Church; an oval cartouche containing the AC monogram, surmounted by a coronet. It was an unbelievable coincidence!

The appearance of the panel opened up new vistas of possibility. Part of the panel was covered in ‘gesso’, a kind of plaster. The material matched the only material which Helen Hughes had managed to extract in tiny amounts from the panels in the church. Jonathan surmised that at some point probably all the panels had been covered in this material. This had the effect of preserving the wood beneath and accounted for why the panels in the church looked fresher than might have been expected given their considerable age. It also suggested that originally, they had probably come from the same set.

Everything now pointed to The Anne of Cleves’ Panels being directly associated with the lady herself, and that they were of sixteenth-century origin. What we needed now was dating evidence. If the wood was of the correct age, we would be able to say definitely that the panels were contemporary to Anne’s life, and this would make them of great historical importance.

Initially, we were not able to sample the wood from the panels in the church. However, we were lucky enough to get permission to subject the auctioned panel to the test. The question was, would it confirm our notion that these were real – or would we all be crushed for a second time; would they indeed turn out to be fakes?

The Mystery of Panels is Solved!

I remember the call from Jonathan very well. The results were in. Here is a copy of the report in full, courtesy of Jonathan:

The Anne of Cleves’ Panels were likely created from a tree felled in the West German / Netherlandish region between the years 1538-1548. The most likely date of the panel’s creation was around 1544. Oh, joy!

This would be exactly around the time that we would expect for these panels to be directly associated with Anne of Cleves. By this time, Anne was divorced from the king and living as a wealthy ‘femme sole’, dependant upon no man. She occupied a series of grand houses thereafter; (in order, these being) Richmond Palace (shown left below), the Manors of Bletchingley and Dartford (shown right below), and finally, in the last months of her life, the King’s Manor at Chelsea.

We can safely surmise that Anne commissioned these highly personalised panels at some point during this period. They reflected her ancestry and were to be carved from wood that had come from the area around, or near to, her Cleveish origins. We know Anne became increasingly homesick in her later years and longed to return home. How poignant then that she should surround herself with such symbolism, carved literally from the land of her childhood!

So, we come to the end of our adventure in time. We now have established beyond doubt that the Anne of Cleves Panels are part of a nationally important historic collection, illustrating the likely interior of the personal environment of a Tudor queen. These panels, and what they illustrate, are rare survivors, as very little of the domestic interiors of the  Tudor royal family survive.

You can visit the panels at St Leonard’s Church during daylight hours, although it might be best to the churchwarden in advance to ensure you will have access. Alternatively, you can view the Bonhams’ panel, which is on permanent display at Hever Castle in Kent. I encourage you to pack your travel bag and hit the road. Give yourself a treat; go gaze upon something that Anne of Cleves herself once knew with great intimacy and likely affection.

If you want to read more detail about this story of ‘rediscovery’, then you will find it documented in In the Footsteps of the Six Wives of Henry VIII. You can also view a 30-minute mini-documentary about the discovery of the panels with Jonathan Foyle and Sarah Morris, here on YouTube.

21 thoughts on “The Anne of Cleves’ Panels – the Missing Evidence is Revealed!”