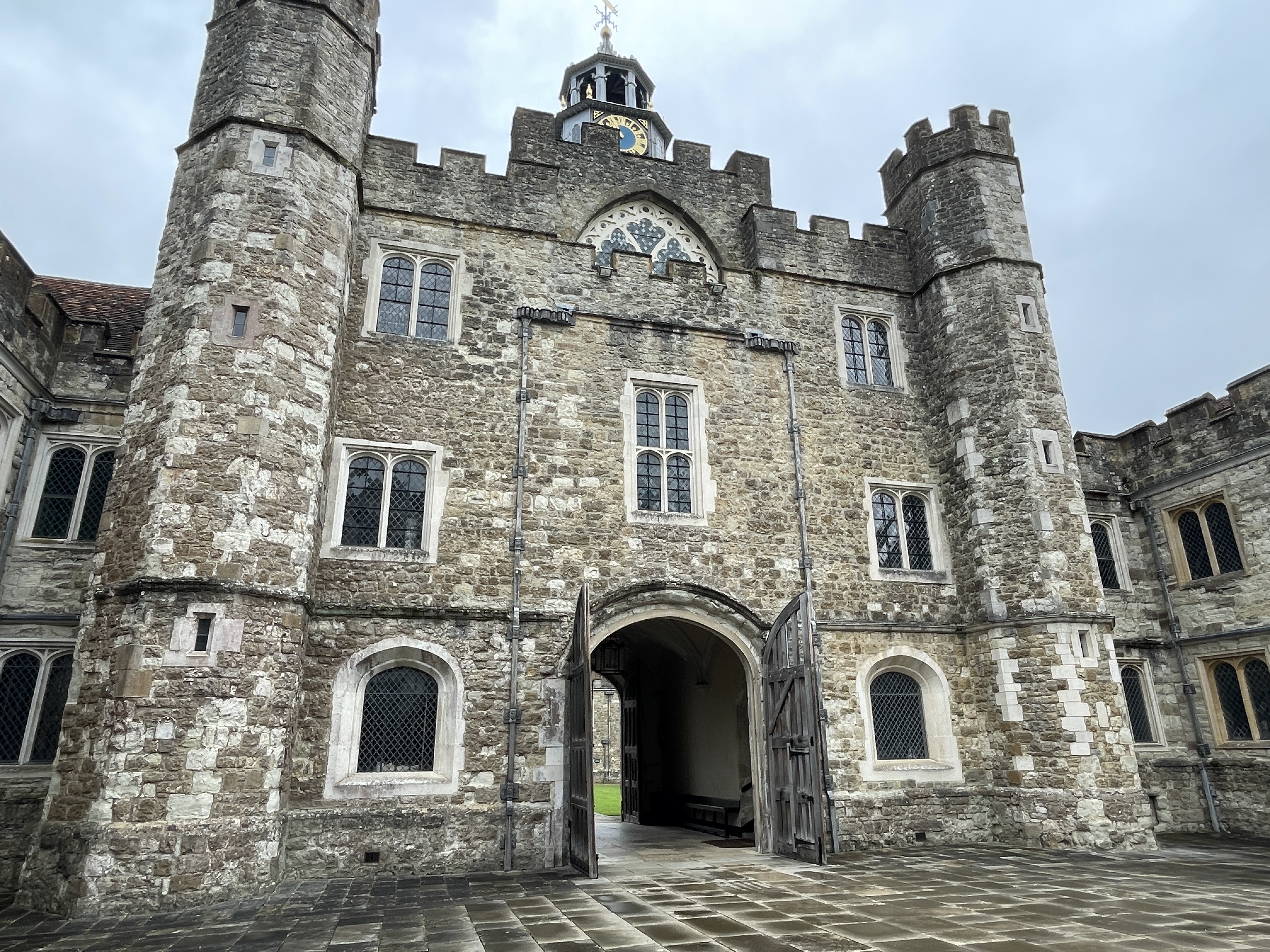 There are affiliate links in this blog

In this month’s episode of The Tudor Travel Show, I talk to the author, Sarah Gristwood, about her new book The Tudors in Love: The Courtly Code Behind the Last Medieval Dynasty. I also meet with Julie Milner, tour and house guide at Knole House in Kent. Together, we take a tour of the house to highlight some of its most illustrious Tudor history.

After being extended by Thomas Bourchier, Archbishop of Canterbury, during the mid-1400s, Knole became a royal possession in 1537. In 1566, Elizabeth I presented the house and estate to her cousin, Thomas Sackville, 1st Earl of Dorset, who substantially remodelled the medieval palace between 1603 and 1608. The Sackville-West family retain ownership of some of the house and parkland today, but it was gifted to the National Trust in 1946 to be opened to the public. As we tour the house, we step back in time to the sixteenth century, discovering some remarkable artefacts from Tudor times.

Please note: These show notes are intended to complement the relevant podcast episode, which can be found here. We highly recommend that you listen to the conversation and use this blog for reference. You will find links to relevant sources towards the end of this blog.

Knole House: A Tour Through Six Centuries Of History

Our tour starts in the Great Hall, originally used as a dining and banqueting room. With its high ceiling and lavish decoration, this magnificent room is the first space visitors see when they enter Knole. It’s home to an intricately carved wooden screen designed in the Mannerist form, which combines late medieval architecture and Renaissance patterns. Look out for Thomas Sackville’s coat of arms and shield in the Sackville colours of red and gold right at the top. The two leopards were thought to be gifted to Thomas Sackville by Queen Elizabeth I when she made him a baron. Known to symbolise, status and bravery, these were a proud belonging to display.

Portraits adorn the walls of the Great Hall, including one of Thomas Sackville himself (attributed to John de Critz, Serjeant-Painter to the King), which hangs opposite the screen. I was struck by the incredible collection of portraits at Knole, which includes paintings of many prominent figures of the Tudor court.

Next, we head to a part of the building which, architecturally speaking, has the closest ties to the Tudor era. Coming up a magnificent carved oak staircase, we enter the Brown Gallery, with its extensive collection of sixteenth and seventeenth-century portraits of many notable Tudor personalities. The artist(s) responsible for the set of portraits in question is not known. IN fact, although a set, they likely to be the work of several artists employed by Thomas Sackville.

Leaving the Jacobean exuberance behind, we finish with a Tudor tribute: a beautiful portrait, ‘An Unknown Lady called Mary, Queen of Scots’ (1542–1587). Hung high on the wall, this oil painting shows the young woman, possibly Mary, Queen of Scots, gazing over her visitors.

To conclude our tour, we head back to the Great Hall to discover an artefact that made its way to Knole from nearby Hever Castle in the nineteenth century. The pair of andirons include figures representing Adam and Eve, a crowned falcon and Henry VIII and Anne’s initials. Attributed to Royal Locksmith, Henry Romayne, this pair of andirons date back to the sixteenth century.

In the second part of this podcast, I meet with the author of several Tudor books, Sarah Gristwood. In the Leicester Gallery at Knole, Sarah tells us about her new book, due to be released at the end of September.

Sarah shares the core themes in her book; she describes how understanding the notion and rules of courtly love, allows us to see the world of the Tudors afresh, through new eyes. As a dynasty in love with the idea of loving, Sarah introduces us to the concepts of chivalric romance and how these ‘rules’ give us a code to ‘unlock’ many of the key events that unfolded during the sixteenth century.

Below are some links to resources mentioned in the podcast episode: