Recently, I had a ‘stop-me-dead-in-my-tracks’ moment. A delicious fluttering of excitement crept over me, the kind I get when I know I have ‘discovered’ something to do with Tudor history that I had known nothing of beforehand. I love these very personal discoveries; they make me look again; they often help me consider things from an angle that I had paid little attention to before. Thus it was, just a couple of weeks ago, when I came across ‘The Three Brothers’ (sometimes known as ‘The Three Bretheren’). It was once one of, if not THE, most coveted jewel in Renaissance Europe.

What was ‘The Three Brothers’ Jewel?

Before I talk about the fascinating history of the jewel, let me describe to you what all the fuss was about. Well, this was one serious piece of ‘bling’! Eminent English art historian, Sir Roy Strong, describes it as ‘the most famous and romantic’ of the Tudor and Stuart Crown Jewels. Thankfully, because ‘The Three Brothers’ was so well-known, it was extremely well described and, over its lifetime, was detailed in several separate inventories.

The first of these was in the inventory of one of its earliest, and most distinguished, owners: Duke Philip the Good of Burgundy (1396-1467). He ruled over Burgundy (a part of France) in the first half of the fifteenth century. By the way, while a sophisticated patron of the arts, he was also the bloke who captured Joan of Arc and sold her to the English, who promptly tried her for heresy and, of course, burned her to death. Charming! Anyway, his inventory, written in old French, reads:

Essentially, three glorious rubies, which were called ‘The Three Brothers’ on account of their being almost exactly the same size and weight, were set around a huge, pointed, central diamond. Philip the Good had then added four magnificent pearls; three were set in between the rubies and one hanging down from the jewel. Towards the end of its known life, in 1623, a letter written by the hand of the Treasurer of James I’s household states that even then ‘The Three Brothers’ was estimated to be worth £7000. But what of its history? Where did it come from? How did it end up in the English Crown Jewels and critically, what happened to it?

The Mesmerising Tale of a Stupendous Jewel…

Whenever you find a jewel which has a name, you know that the story behind its existence is going to be a fascinating one. On this count, ‘The Three Brothers’ delivers and leaves us with an agonising unsolved mystery as to its current whereabouts. We know that the jewel was created at the close of the fourteenth century, (1389 to be exact), by a Parisian goldsmith Herman Ruissel. Philip the Good’s father, John the Fearless, had commissioned the jewel and when he was assassinated in 1419, it was inherited by his son. As the Burgundian Court was known to be one of the most lavish and sophisticated courts in Europe, it is perhaps not surprising that Duke John should commission such an extravagant piece.

Towards the end of his life, Philip faced revolt on one of his borders and the Burgundian state entered into three sieges with the town of Liege (in modern-day Belgium), who wanted nothing to do with Burgundian Rule. Philip’s troops, led by his son, Charles the Bold, most often had the upper hand and enacted some horrendous atrocities in the process. However, during the second siege of 1467, the Burgundian forces were defeated. The victorious Swiss side captured the Burgundian camp, making off with a huge amount of booty, which Charles apparently habitually carried with him to war. This included ‘The Three Brothers’, as well as another enduring gem, the ‘Scancy Diamond’, (which we may well talk about in another blog). Strong describes how ‘the pendant [then] passed by devious means, along with other famous jewels, into the hands of the magistrates of the town of Basle’.

It was not until some 40 years later when old wounds had been at least partially healed, that the Basle magistrates dared to put these looted goods up for sale. In a sixteenth-century version of a sales catalogue, a drawing of the jewel was made around the turn of the sixteenth century (see the image at the top of this article). It allowed potential buyers to preview the goods on offer. At this point, the jewel was sold to the filthy-rich Auschburg banking family: the Fuggers, who bought it and subsequently retained possession of the jewel for another 50 years.

‘The Three Brothers’ Comes to England

Vainglorious and covetous, Henry VIII was never one to be knowingly surpassed by others in terms of wealth and grandeur. At some point, it is thought that the King of England’s sights became set on purchasing ‘The Three Brothers’ for himself. The evidence of this desire seems to come from a letter, written in Antwerp and dated December 1544. It is clear that an intermediary of the Fuggers, called Jasper Dowche, was preparing to bring a smorgasbord of plate and jewels to Henry for his choosing. The suggestion is that this included our jewel. According to Roy Strong, the details of the transaction are ‘obscure’. Jasper seems to have been lily-livered when it came to the idea of crossing the English Channel in December – and having done that in a storm myself, I can’t blame him! However, death would eventually intervene to ensure Henry VIII never got his hands on one of the most desired jewels in Europe. That pleasure would fall to his son, Edward VI.

In May 1551, the deal was complete and ‘The Three Brothers’ became part of the English Crown jewels. It is listed as one of the jewels delivered to the new Queen, Mary I, on 20 September 1553, just prior to her coronation on 1 October. I suspect Mary was selecting what jewels she might wear to dazzle the court and foreign onlookers over the course of coronation festivities! However, it is not until the reign of Elizabeth that the jewel is seen more clearly – and in all its splendour. Perhaps it was a favourite of Elizabeth’s, as she is seen wearing it not only in two portraits of her, but it is proudly displayed on the carved marble effigy of Elizabeth on her tomb at Westminster Abbey.

As with Mary, the jewel also appears in a list, this time apparently delivered to a Mary Radclyffe, a Gentlewoman of the Queen’s Bedchamber, for safe-keeping, in 1587. It is described as ‘a faier flower with three great ballaces and in the middest, a great pointed diamonde with three great pearles, sett with a faier great pendaunt pearle. Called the Brethren‘.

With Elizabeth’s death, the new Stuart King, James I of England, inherited ‘The Three Brothers’ from his Tudor predecessor. Magically, this jewel’s glory is captured for the final time in a rather austere looking portrait of the king (see below). In this case, the jewel has been transformed into a rather ostentatious hat pin. Standing on its own, set against the king’s plain, black hat, it can be seen with the greatest clarity. Roy Strong notes that in 1606, it was one of the jewels that were designated never to be ‘alienated from the Crown’. Sadly, this was not enough to preserve its future as part of the English Crown Jewels – as we shall shortly see.

Adventure lay ahead for the jewel! In the 1620s, ‘The Three Brothers’ was to play a part in a covert operation that would see the future Charles I vie for the hand in marriage of a Spanish infanta. The jewel was reset ahead of Charles incognito adventure across France and into Spain. It was meant to ‘wow’ the Spanish King, Philip IV, as well as Charles’ potential bride. In the letter referred to at the outset of this blog, we read about the process of resetting the jewel, alongside another fine description of its appearance:

‘…yesternight he brought me the great pointed diamond to see, which he took out of the jewell called the Brethren, which he commendeth to be the most compleat stone that ever he sawe, and farr to excell the pointed ringe diamant which the Kinge wearethe at his chaine, the beauty wherof was before obscured, by beinge too much covered with the gold, which he will nowe amend, in the newe settinge of it, and he doth value the same to be worth seven thousand poundes.’

Although reset, apparently the jewel retained its form, simply adhering to the Stuart fashion for placing more emphasis on revealing the size and appearance of the jewels. And if you want to hear some seventeenth-century advice about what jewels you might wear to impress any future suitor, then a letter from James I to his son, Charles, explains how the 22-year-old should wear ‘The Three Brothers’ for maximum impact…’and I send you for youre wearing the Three Brethren that you knowe full well, but newlie sette; and the Mirroure of Fraunce, the fellowe of the Portugall Dyamont, whiche I wolde wishe you to weare alone in your hatte with a litle blakke feather.’ Basically, just like his father in the portrait above!

Unfortunately, for the Stuart dynasty, trouble was brewing across England’s green and pleasant land. The Crown was beginning to sink into debt and would eventually descend into war with the English Government, led by Oliver Cromwell. Charles first sold the jewel in the Netherlands shortly thereafter, in 1625, only to reclaim it over a decade later in 1639. However, by the 1640s, at the height of the English Civil War, the Crown was in desperate need of funds. King Charles I dispatched his wife to the continent in order to pawn some of the royal jewellery. She arrived in the Hague in March 1642, but despite her efforts to sell ‘The Three Brothers’, a buyer could not be found.

By 1644, the Civil War was raging in England and Henrietta Maria finally fled to Paris for safety. One of her immediate tasks was to raise money to support her husband and the royalist army in their quest to defeat the Parliamentarian forces. It is around this time that the jewel was finally sold. After 1645 it is never heard of again. And so, a great medieval jewel, which touched the lives of several icons of their time, a jewel which passed from one great noble family to another, finally fell victim to war. Doubtless, we shall never know what happened to ‘The Three Brothers’, once the most coveted and expensive jewels in all of Europe. 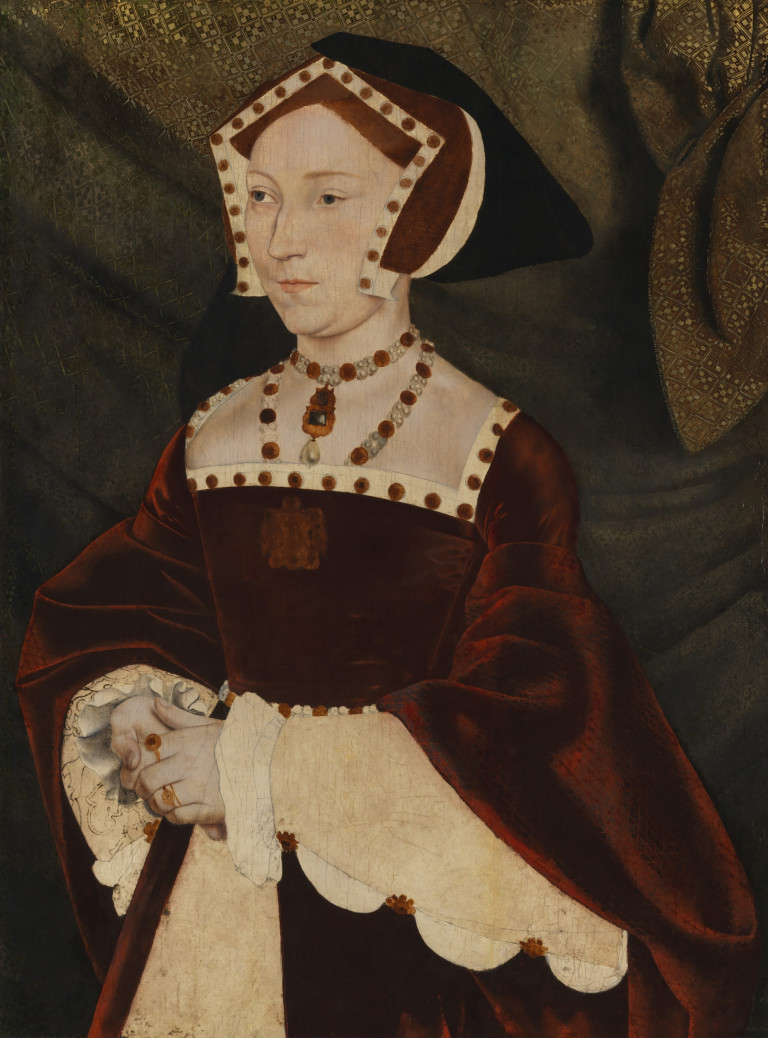 Do you find most of the portraits of Elizabeth I frustratingly aloof? The majestic ‘Virgin Queen’, her face and hair… 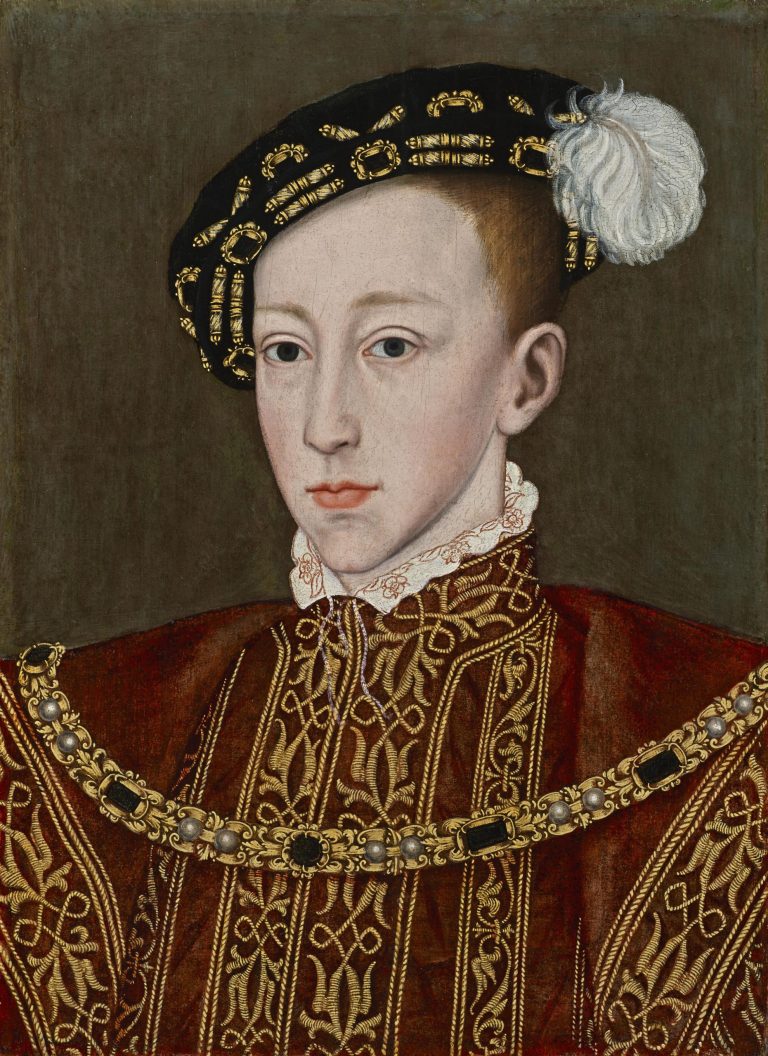 The header image is a watercolour painting which shows detail of one of the Cowdray murals, recording the sinking of…