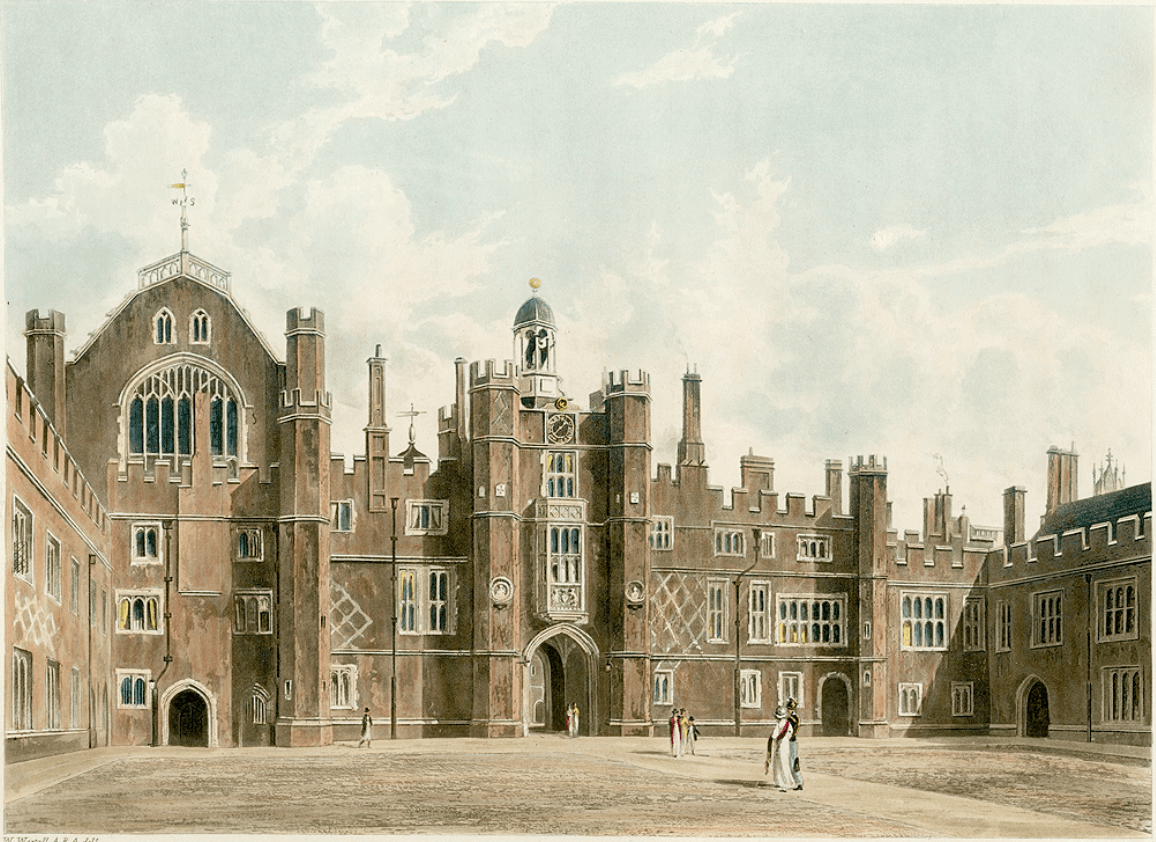 The 30 November (2020) sees the 490th anniversary of the sad demise and death of Cardinal Thomas Wolsey at Leicester Abbey. This followed his arrest for treason at Cawood Castle in North Yorkshire earlier that month. To commemorate this event, The Tudor Travel Guide team are holding a virtual summit over the weekend of the 28-29 November 2020. It will celebrate, and remember, The Rise and Fall of Cardinal Wolsey. One aspect that we will be exploring in the summit is the notion of Wolsey as a patron of the arts. Nowhere does this remain more evident than in the bricks and mortar of the greatest surviving palace of the Tudor age, Hampton Court.

You can tune in to the summit to see me in conversation with Dr Jonathan Foyle, who has extensively researched Wolsey’s early palace. Jonathan describes how Hampton Court became a physical expression of the Cardinal’s status, wealth and power. You can click on the image below, or at the end of this blog to register. But for now, let’s go back in time, to before the great palace we know today took shape, and explore its earliest origins.

The Origins of Hampton Court Palace

When we think of Hampton Court Palace, most of us immediately associate it with the court of King Henry VIII. We recall the pivotal events of his reign that unfolded within its russet-coloured walls: the stillbirth of Anne Boleyn’s second child in 1534; the birth of the future Edward VI in 1537 and death of his mother, Jane Seymour, shortly thereafter; the arrest of Katherine Howard in 1541 and finally Henry’s marriage to Katherine Parr in 1543. Much credit is given to Henry for the building we see today, but in recent years, architectural historians such as Jonathan Foyle, have begun to shed light on the role played by Thomas Wolsey in the genius and glory of the building.

Although it wasn’t my original intention, it turns out that this blog will be the first of three. The second will focus on the development of Hampton Court by Wolsey after 1515, and the third will describe the changes that Henry VIII subsequently made to the palace during his extensive refurbishment of the building after 1529. As far as this blog is concerned though, I had some gaps I needed to fill in about the earliest origins of the greatest Tudor palace in England, so I went on a quest to find out more…

It is no accident that Hampton Court Palace it sited where it is today, although urbanisation has obscured some of the original attributes of the surrounding landscape that made the building of the initial grange and manor house an attractive prospect. Today, the palace is engulfed by suburbia. A busy road runs to the west of the palace gates and the adjacent town of East Moseley brings a hum of twenty-first-century living. But to enjoy Hampton Court as it was meant to be appreciated, we must allow all such trappings of modern-day life to dissolve away into time.

Hampton Court, as it was known from the beginning of its history, was established in the heart of the Surrey countryside, on the north bank of the River Thames. Clearly, there was a settlement on-site even before the Norman Conquest of England in 1066: the name ‘Hampton’ originating from Anglo-Saxon, with Hame meaning home and Ton signifying a cluster of houses fortified with a hedge and ditch.

The building lies 13 miles from central London in a westerly direction. Here the ground is flat, gravelly and therefore, well-drained. An account of the palace, written towards the end of the nineteenth century captures an image of the surrounding countryside, much as it might have looked some 300 years previously before relentless urban sprawl swallowed up the surrounding countryside. Ernest Law’s History of Hampton Court Palace, first published in 1889, describes how the stretch of riverbank across from Hampton Court was even then ‘studded with eyots [small river islands], and bordered with luxuriant meadows fringed with willows’. He goes on to describe how the meadows beyond were ‘crowned with flowers’ with ‘clusters of trees, flowery hedgerows and broad undulating heath-clad commons’. Beyond that, when houses did not obscure the view, you could see the ‘dim blue outline of the Surrey Hills’. All very pleasant, and a far cry from the dirt, filth and pestilence of Tudor London!

Of course, there was another critical factor in Wolsey’s interest in developing the modest, existing medieval manor into a grand and palatial building: it lay roughly midway between London and another major royal palace at Windsor (20 miles upstream from Hampton Court). It was also in easy reach of Richmond Palace eight miles downstream. The river connected them all via ‘the silent highway’ of the Thames, thereby avoiding the relative lawlessness of England’s overland road network. The river provided an easy and pleasant way to travel – and thus, Hampton Court became a convenient stopping off point for royalty, visiting dignitaries and ambassadors. However, Wolsey was not the first substantive owner of the manor of Hampton.

Records stretch back to 1086, with early owners including Walter de St Valerie, whose family owned the manor for around 150 years thereafter. During the early thirteenth-century, Hampton Court was passed to Henry de St Alban, who in turn either lent or gave the land to the Knights Hospitallers of St John of Jerusalem. They had their English HQ at St John’s Priory in the City. During the early fourteenth century, wealthy local landowners bestowed further lands upon the manor, such that by the beginning of the 1400s, Hampton Court had augmented to an estate of considerable value. This estate included a ‘preceptory’ (monastery of the Order of the Knights Hospitallers), ‘a small mansion’ (which Law states was probably on the site of the current palace) and ‘a garden with a dovecot’, alongside around 1000 acres of pasture and arable land.

Another 150 years go by before we hear more of Hampton Court. In 1503, the manor was visited by Elizabeth of York. At the time, the property was being leased from the Knight’s Hospitallers by Lord Daubeney, who had risen to become Lord Chancellor under Henry VII. It is perhaps, therefore, not surprising that the queen should be a guest of one of the most influential men in the land at the time.

The queen’s privy purse expenses reveal that she was rowed by 12 oarsmen upstream from Richmond to Hampton Court by barge. The occasion of the visit was a retreat to the then religious foundation to pray for the safe delivery of a child, for Elizabeth was heavily pregnant at the time. Elizabeth stayed at the manor for eight days, before being conveyed back to Richmond with her ladies in a ‘grete bote’. Sadly, she would die from puerperal sepsis just one month later. The use of Hampton Court in this way is not surprising given the contents of a letter from Richard Fox, Bishop of Winchester, to Wolsey around this time. Fox describes how Henry VII used Hampton Court as a ‘cell’, or subsidiary house, within easy reach of Richmond.

One more royal visit was to grace the manor of Hampton Court before it was acquired by Cardinal Wolsey. A young and virile Henry VIII arrived there with Katherine of Aragon on 20 March 1514. During the visit, a Venetian called Giovanni Ratto presented the king with an incredibly valuable Mantuan ‘barb’ or racehorse on behalf of the Marquis of Mantua. Apparently, the Marquis had been offered his weight in gold for the horse but had instead decided to gift it to the King of England, who clearly appreciated the value of the gift, later writing a note of thanks to the Marquis that it was ‘the most beautiful, high bred and surpassing steeds’.

Then, on midsummers day, 21 June 1514, an indenture was granted from Thomas Docwra, prior of the Knight’s Hospitaller to ‘the most Rev. Father in God Thomas Wolsey, Archbishop of York’ for the lease of Hampton Court for a term of 99 years at a rent of £50 per annum. A copy of the lease is described in Law’s account; it confirms the presence of a small manor house, which was apparently moated. It seems to have been sparsely furnished at this point; a hall is described containing only two tables and a cupboard. A parlour, tower chamber, chapel and kitchen are also mentioned.

The following year, 1515, saw the commencement of Wolsey’s ambitious project to convert a modest, medieval manor house into one of the most impressive and sumptuous buildings in England. It was so majestic that Henry VIII would come to covert it for himself but first, Wolsey would create a building that was unique on English soil: a very English palace with an Italianate twist. It was a palace that would dazzle visiting European dignitaries and cement Wolsey’s status as the most powerful and influential man in England, next to the king himself.

In a subsequent blog, I will describe Wolsey’s grand design and recreate the palace he built before Henry VIII seized it from the Cardinal. In the meantime, you can hear more about Wolsey’s Hampton Court from Jonathan Foyle in my up-and-coming summit: The Rise and Fall of Cardinal Wolsey. Just click here to find out more and save your FREE place.

2 thoughts on “Hampton Court: The Emergence of a Tudor Palace”