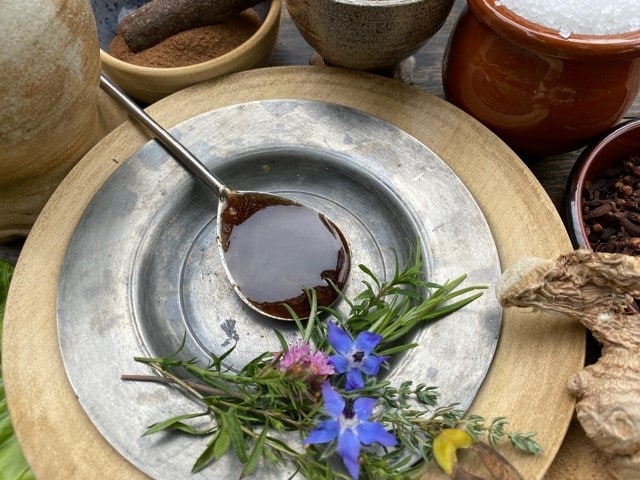 Welcome back to The Great Tudor Bake Off. As the autumn approaches for us in the UK, Brigitte Webster, our resident chef here at The Tudor Travel Guide, has got a recipe packed full of nutrients to keep your immune system boosted. The Tudors considered food to be a type of medicine provided by nature, often relying on herbal treatments for illnesses. This Tudor Syrup is packed full of greens and can be kept in an airtight container.

To the Tudors, ‘herbes’ included not just our commonly known herbs but also green, leafy vegetables such as kale and lettuce. Herbs were highly esteemed for their many purposes: ‘pot herbs’ in the kitchen to flavour meals, medicinal herbs to treat medical issues and sweet herbs were valued as strewing herbs, and also served as room fresheners.

Recipe books from Tudor England often list culinary recipes together with medicinal recipes and then, as now, it was understood that food in itself was a kind of medicine provided by nature.

Cordials and syrups were considered to be medicine and were therefore not used as a drink. The arrival of cheaper sugar from the Americas during Elizabeth I’s reign fuelled a fashion to create diverse flavoured cordials and syrups, while sugar itself was seen as a magical cure for many ailments.

Lettuce is not an obvious herb to us today, but to the Tudors, it was a popular potherb, used cooked in pottage and raw in salads. In William Turner’s entry on lettuce in ‘The Names of Herbes’ (1568), he suggests that there are three kinds: endive, cabbage and spinach.

In the ‘Castel of Health’ (1539), physician Sir Thomas Elyot says, that ‘amongst all herbes, none hath soo good juyce as letise … it increaseth mylke in a woman’ breastes, but abatheth carnall appeite’. This is confirmed a little later by Andrew Boorde, he adds, that it ‘is good for a hote stomacke, and doth prouoke slepe’, amongst other benefits.

Andrew Boorde also tells us about the plant, borage, stating that it comforts the heart and causes a man to be merry. John Gerard confirmed this in 1597, writing that the leaves and flowers of borage put into wine make men and women glad and merry. He also mentions that syrup made from the flowers comforts the heart and that the flowers, which were used in salads, make the mind glad. In the ‘Castel of Health’ (1539), Sir Thomas Elyot says that, “Bourage maketh one mery eaten rawe before meales, or layde in wyne that is drunke’. Today, borage flowers and leaves, as well as the oil from its seeds, are used as medicine – borage seed oil is used for skin disorders.

Rosemary was generally used in the kitchen for flavouring pottages and also featured as an ingredient in cordials. In the ‘Castel of Health’ (1539), Sir Thomas Elyot says, that ‘Rosemary has many virtues including helping a cough if taken with pepper and honey’. John Partridge advises in ‘The Treasurie of commodious Conceipts’ (1573), that its flowers should be gathered in May. Indeed, he writes about its health benefits (virtues) and praises this herb much more than any others. He recommends putting the leaves into a wine vessel to prevent them from going off. Andrew Boorde praises rosemary for its use in treating ‘fallynge syckenes and for the cowghe, and good against colde’.

According to John Gerard, thyme was hot and dry in the third degree and boiled in water, and drunk with honey could be used to treat a cough: ‘Time boyled in Mede’ cleans the lungs and kills parasitic worms in the bowel. He also tells us that thyme is good against sciatica, and Andrew Boorde thought that thyme could help with breaking up kidney or bladder stones.

John Gerard mentions all three varieties of hyssop: the purple, the red and the white-flowered variety. He recommends a syrup of the juice of the hyssop taken with vinegar syrup to purge the digestive system and to get rid of worms . Andrew Boorde however suggests, that ‘isope clenseth viscus fleume, and is good for the breste and for the lunges’. If we can believe the teachings of the ‘Tacuinum Sanitates in Medicina’, then hyssop eases whooping cough, mixed with oil kills headlice and crushed with caraway seeds will successfully treat a bite from a venomous snake.

The Tudors were the first to mention winter and summer savory and John Gerard lists both. Considered hot and dry in the third degree, and even better, it ‘maketh thin’. Slimming World Tudor style! He advises to eat it with beans and peas and other ‘windie pulses’.

Original Recipe From ‘The Treasurie of commodious Conceits’ by John Partridge, 1573

‘Take Buglosse, Borage, white Endiue, of each .i. handful, of Rosemary, Tyme, Isop, winter Sauery, of each halfe a handful sseth them (being fyrste broken between your’ hands) in .iii. quarters of water, vnto iii. Pints, the straine it, and put to ye liquor, whole cloues an ounce, pouder of Cinimon: half an ounce, pouder of Ginger: a quarter of an ounce .i. Nutmeg in powder, of suger half a pound, or more: let them seethe vpon a softe fyre well styred for burning too, vntyll it come to thicknesse ofliue Hony, then keepe it in Gallypots, if you put i. pynte Malmzey in second seething, it wyl be better. When it is perfecte, haue sixe graynes of fine Muske in powder, stiffe it amongst your Syrop as ye put it in the Gallypot, and couer it.

This Syrop will last many yeres and is excellent against swowning and faitnesse of hert it coforteth the Brayne and Sinewes, if it bee vsed as muche as a Hasell Nut at once, at your pleasure’

Handful of other green leafy herb such as spinach etc

Handful of borage leaves (or similar)

½ of handful of fresh hyssop

½ once ounce of ground cinnamon

I did not have any bugloss (Alkanet) in my garden, so I just replaced it with an extra measure of lettuce.

The Tudors used syrups as a medicinal substance and as such did not dilute it with water. As the recipe claims, this syrup was considered good for the brain and the sinus and you only needed to take as little as the size of a hazelnut whenever you felt like it.

Musk is a type of aromatic substance commonly used as base in perfumery. They include glandular secretions from the musk deer and it was commonly added to food in sixteenth and seventeenth century in England. I used a musk alternative (musk flavoured oil).

To watch Brigitte make this traditional Tudor Syrup, click on the image below: