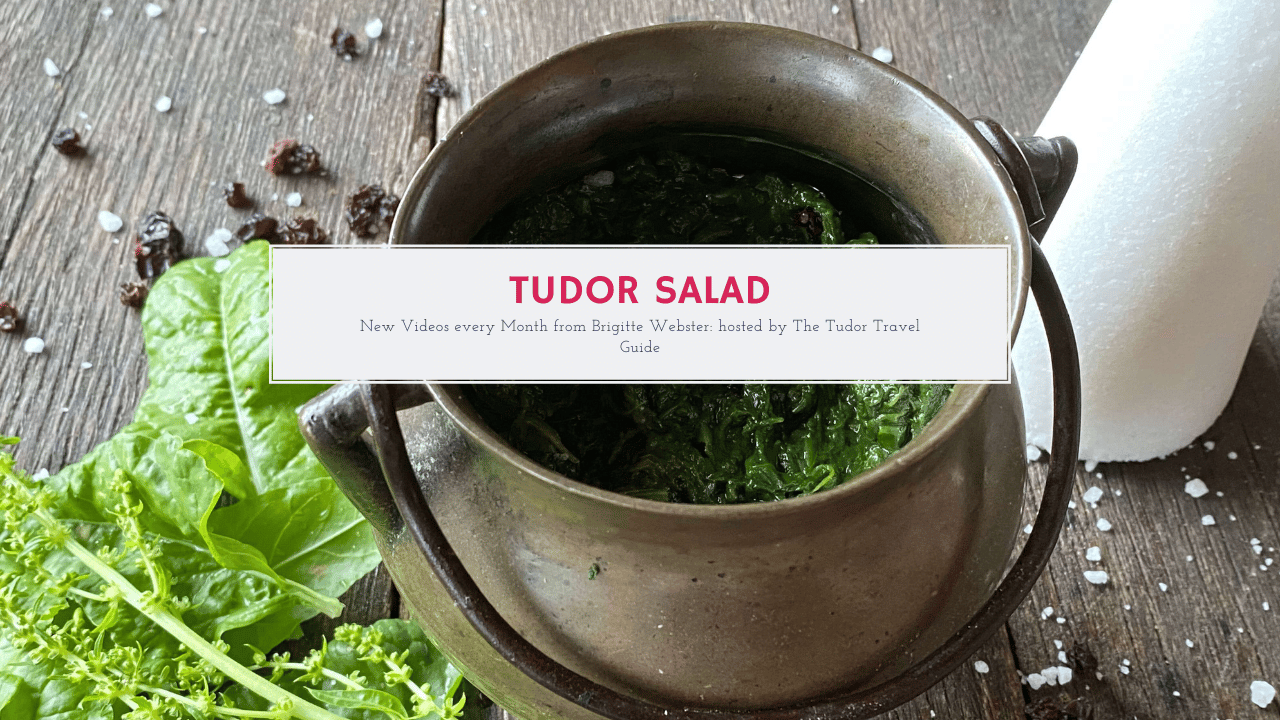 Welcome back to The Great Tudor Bake Off. This month at The Tudor Travel Guide, our resident chef, Brigitte Webster, tells us about salad in Tudor England and Europe. Salads were quite common in the fourteenth and early fifteenth centuries in England but by the time the Tudors came to power, they had more or less disappeared from the menu of the affluent and noble: “Beware of sallettes and raw fruytes for they will make your soverayne seke” advised Wynkin de Worde in 1508. In this blog, you’ll learn how to make a traditional Tudor salad, and discover the reasons salads increased in popularity during Tudor times.

Likely derived from the word ‘sal’, Latin for ‘salt’, or ‘vinegar’, the word ‘salad’ began to appear more regularly in the sixteenth century. Platina’s description of salad in the fourteenth century refers to it as ‘a light, mild and pleasant start to the meal’, including different varieties of lettuce, and herbs such as mint, parsley, chervil, oregano and fennel dressed with salt, oil and vinegar.

Health And Nutrition In Tudor Times

Inherited from the ancient Greek philosophers, Aristotle, Hippocrates and Galen, the Tudors believed the human body was made up of four humours. Each of the four humours were associated with an element (earth, water, fire or air), a season, an organ and a quality (cold and dry, cold and moist, hot and dry or hot and moist). In order to stay healthy, these four fluids, which had warming, cooling, dry or wet properties had to be balanced. As raw salad leaves were believed to produce cold and moist humours (fluids), in a cold and wet climate like in England, this was potentially dangerous and should therefore be avoided. However, the addition of dry and hot pepper or salt acted as a ‘corrective’ and salads were acceptable to eat – in moderation. Almost sounds like we swapped salads for chocolate in the twenty-first century!

With a warmer and drier climate, salads were viewed differently in Spain and Italy. In an account from 1596, English courtier and Italophile Robert Dallington noted that in Tuscany, ‘a sallet is as ordinary as salt at the English table, eaten by all sorts of people and all the year’. In England ‘boyled sallets’ were the preferred option, as one of the recipes from ‘A Book of Cookrye’ from 1591 mentions. This particular recipe (see video link at the end of this blog) includes boiled spinach (slightly cold and moist in terms of properties), but the process of cooking and the addition of sugar ‘balanced’ the undesired cold and wet humours and thus a salad became acceptable to eat. A balanced meal the Tudor Way!

Changing Attitudes Towards Salad In Tudor England And Europe

It is a possibility that Katherine of Aragon helped to change the negative attitudes towards salad in Tudor England and Europe after she arrived in England. By the 1540s, the English physician Sir Thomas Elyot was recommending herbs like rocket, borage, purslane, and onions along with imported olives and capers, in his book ‘Castel of Helth’. He credited them with ‘stirring up the appetite to meat’ and ‘promoting digestion’. In the 1550s, salads began to be served as a starter at lunch time and supper time. Early salads contained cooked and preserved items as well as fresh ingredients.

In 1597, herbalist John Gerard confirmed in ‘Herball’, 1597, that ‘salad is served in these daies in the beginning of supper and eaten first before any other meat… for being taken before meat it doth many time stir up appetite’. He also observed, that ‘if eaten after supper it keepeth away drunkennesse which cometh by the wine’.

By the late 1500s, the consumption of salads in Tudor England and Europe were ‘not only resumed among the poor commoners, but also fed upon as dainty dishes at the table to delicate merchants, gentlemen and the nobility, who make their provision yearly for new seeds out of strange countries’ as observed by country vicar William Harrison in 1587. He further bemoans the wealthy’s urge to purchase exotic food in favour of home-grown, local produce and fresh salads in his ‘Description of England’. He also implies that in England, salad was only eaten in the summertime.

Types Of Salads In Tudor England And Europe

In Tudor England, salads came in three categories: simple, compound and grand. The simplest salads were rather basic, consisting of freshly gathered and washed salad herbs, lettuce dressed in oil, vinegar and sugar or boiled onions, asparagus, samphire, or cucumbers dressed with oil, vinegar and pepper. Vegetables such as onion, spinach, asparagus, carrot and globe artichoke were first boiled, dressed with vinegar, olive oil and pepper, and then served cold.

Compound salads contained a little bit of everything from fresh, raw herbs to cooked and preserved ingredients. Grand salads were a feature of the late sixteenth century and developed an impressive appearance which, by the early seventeenth century, had achieved its all time high with the ornate ‘Grand Salad’. These were huge plates decorated with salad herbs, enriched with nuts, dried fruits, olives and capers. The salad was then garnished with a riot of colours and edible decorations such as flowers or dyed vinegars. Some vegetables such as carrorts were carved into decorative shapes. The purpose was to wow with taste and looks! However, in ‘The Making of Strange Salats’, Gervase Markham recommended ornamental ‘Sallats for Shew Onely’, which consisted of boiled vegetables arranged into ‘many shapes and proportions’.

Although salad ingredients do not occur in the royal ordinances and dietaries, probably because they were grown in-house, they do appear on menus and in other sources from this period. One royal recipe from ‘Forme of Cury’, 1393, (an extensive, 14th-century collection of medieval English recipes) included parsley, sage, garlic, spring onion, leek, porret (young leek), borage, mint, fennel, garden cress, rue, rosemary and purslane to be washed, picked clean, mixed with olive oil and sprinkled with vinegar and salt.

Dressings for salad in Tudor England and Europe were similar to today, except that lettuce was included and salt was replaced with sugar. Regular deliveries from the King’s royal gardens included lettuce, cucumber and radishes, with cucumber reportedly being transported from Beaulieu in Essex to Hertford for the King’s consumption. Radishes appear only once in the whole list of Privy Purse expenses, so may still have been a novelty in the late 1520s.

Olive oil in salads seems to have been a rich man’s taste adopted from the continent at the beginning of the sixteenth century, gradually spreading amongst the gentry class. Bottles of salad oil appeared in the household shopping lists of country gentlewomen by 1600, which would have been uncommon or unseen before 1550. It is believed that Cardinal Wolsey received a barrel of salad oil as a gift from the Comptroller of (the port of) Poole in June 1529.

The trouble taken by the gentry to get salad oil suggests that there were considerable variations of quality. The Shuttleworths of Lancashire deemed it necessary to send a servant to London for both vinegar and salad oil. In their accounts, the Howards of Naworth distinguish between frying and salad oil, both made from olives.  Rapeseed oil was beginning to be grown in East Anglia in the 1560s but wasn’t used as salad oil until a hundred years later.

Vinegar came in numerous possible flavours according to the fruit or plant added to the liquid. The English word vinegar comes from French ‘vin aigre’ meaning “sour wine”. Vinegar was the universal seasoning, widely available and cheap to buy. For a Tudor vinegar recipe, see here.

Original Recipe For a ‘Boyled Sallet’

‘Take Spinage and boyle it and chop it, and when it is chopped, poure it in a little Pipkin, with  Corance, sweete Butter, Vinagre, and Sugar, boyle them altogether, and when they are boyled put it in a dishe, and lay sippets round about, and strew suger upon them and serve them out’.

Quantities given are guidelines and can be reduced or increased according to taste and the number of people.

One slice of white bread, toasted per person

To watch Brigitte make this traditional Tudor salad, click on the image below:

1 thought on “Salad In Tudor England And Europe”