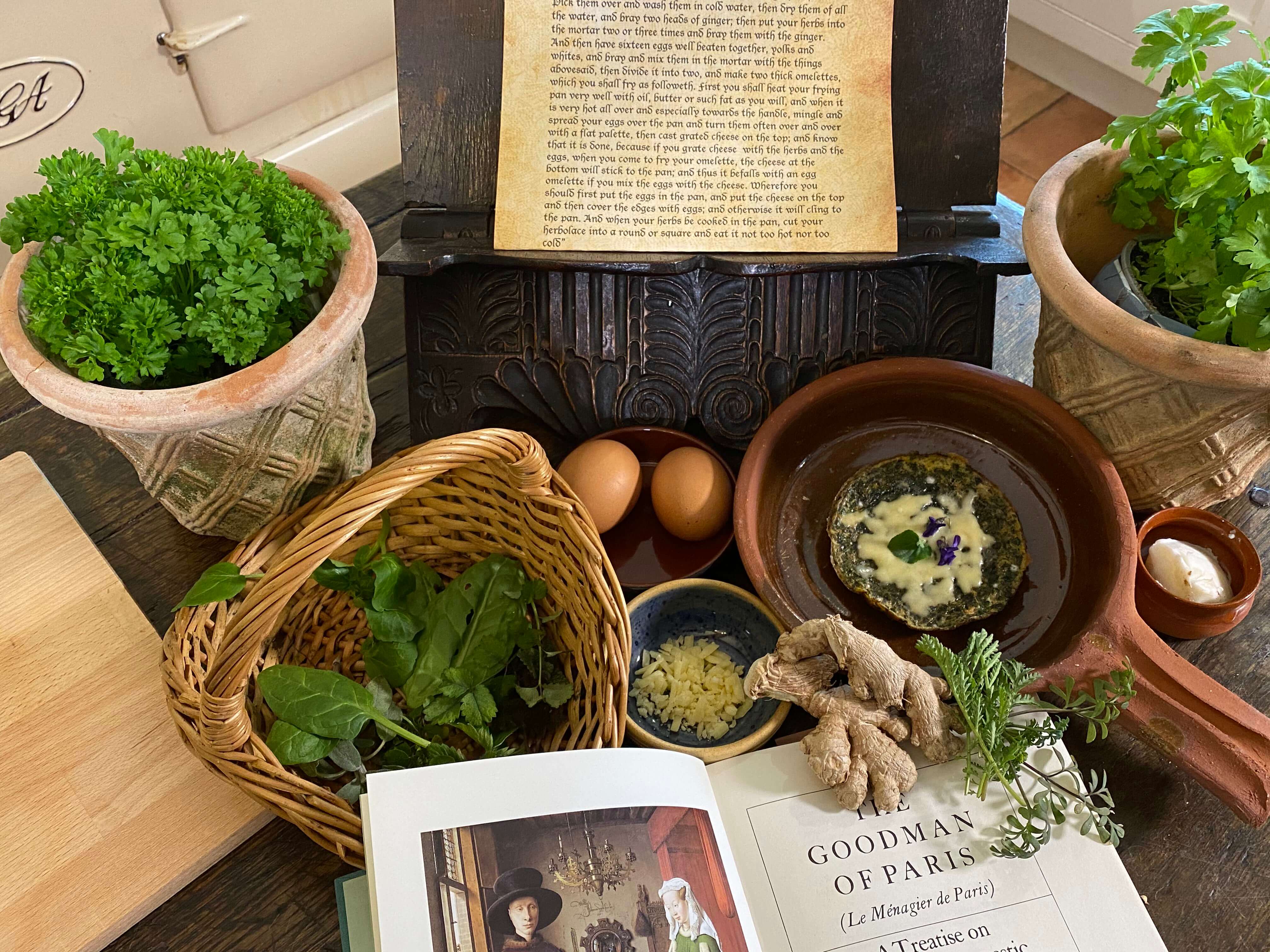 With Easter just around the corner, our chef at The Tudor Travel Guide, Brigitte Webster, introduces us to Tudor Tansy Cake: An Easter Tradition. A familiar dish to the Tudors, but almost forgotten in current times, tans(e)y cake is an egg-based dish similar to an omelette. After the harsh forty days of Lent without any meat, dairy, eggs or cheese, Easter was a welcome relief in Tudor times and, of course, eggs were plentiful after the four weeks of Lent when they weren’t eaten. An ancient symbol of new life, eggs have long been associated with pagan festivals celebrating spring. In Tudor times, eggs were a popular Easter gift from commoners to their lords, who hoped to get invited for a feast at the manor in return.

The Tansy Herb: Where Tudor Tansy Cake Got Its Name

Also called ‘erbolat’ and described as herb custard, tansy is a herby omelette. In Tudor times, tansy was flavoured with the juices of the perennial yellow flowered herb tanacetum vulgare or tansy. The young leaves of tansy develop toxins with the increasing warmth and sunshine in the spring and should therefore be avoided. The effects on the human body are harmful and abortive, the very reason why the Tudors used tansy to rid the bowel of worms, and sadly, for women who found themselves with an unwanted pregnancy. To the Tudors, the cleansing of the bowels after eating fish for a prolonged time was absolutely essential, as they were convinced that eating fish came with parasitic intestinal worms. Tansy was also used as a strewing herb to deter flies.

The stems and foliage of the tansy plant are extremely bitter, associating it with the herbs customarily eaten on Easter Day as a remembrance of the bitter herbs eaten by the Jews at Passover. However, there are also other herbs that were sometimes used instead of tansy such as dittany, rue, wild celery, mint, sage, marjoram, fennel, parsley, chard, violet leaves, spinach, lettuce or clary, as described in the Arboulastre of the Menagier de Paris (recipe 225), dating back to 1393.

In 1656, James Coles wrote that eating tansy cake originated as a wholesome alternative after the salt fish consumed during Lent. It was also believed to have healing properties and to counteract any ill effects which the ‘moist and cold constitution of winter has made on people… though many understand it not, and some simple people take it for a matter of superstition to do so’.

Despite it’s simple ingredients, tansy cake wasn’t just popular with the lower classes. It is believed to have been a reward for the victors of games of handball between archbishops and bishops with men of their congregation. In the spring of 1559, six-penny-worth of wild tansy was purchased at Epsom for the Earl of Leicester. In Thomas Tusser’s Five Hundred Points of Good Husbandry from 1573, we find tansy in a list of kitchen herbs and strewing herbs for the month of March.

Further evidence to suggest the popularity of tansy in Tudor times appears in John Gerard’s Herball, 1597, where he states that in spring, the new leaves are mixed with eggs to make tansy cakes. Little did he know about its danger, however, as he goes on to say that it is pleasant in taste, good for the stomach and clears all bad humours. He also recommended preserving the root in honey or sugar as protection against gout.

‘Herebolace’ (Arboulastre) – French recipe for a tansy from Le Ménagier de Paris, circa 1393. Translation from French to English by Eileen Power:

“Take of dittany two leaves only, and of rue less than the half or naught, for know that it is strong and bitter; of smallage, tansy, mint and sage, of each some four leaves or less; for each is strong: marjoram a little more, fennel more, parsley more still; but of porray, beets, violet leaves, spinach, lettuces and clary, as much of the one as of the others, until you have two large handfuls. Pick them over and wash them in cold water, then dry them of all the water, and bray two heads of ginger; then put your herbs into the mortar two or three times and bray them with the ginger. And then have sixteen eggs well beaten together, yolks and whites, and bray and mix them in the mortar with the things abovesaid, then divide it into two, and make two thick omelettes, which you shall fry as followeth. First you shall heat your frying pan very well with oil, butter or such fat as you will, and when it is very hot all over and especially towards the handle, mingle and spread your eggs over the pan and turn them often over and over with a flat palette, then cast grated cheese on the top; and know that it is done, because if you grate cheese  with the herbs and the eggs, when you come to fry your omelette, the cheese at the bottom will stick to the pan; and thus it befalls with an egg omelette if you mix the eggs with the cheese. Wherefore you should first put the eggs in the pan, and put the cheese on the top and then cover the edges with eggs; and otherwise it will cling to the pan. And when your herbs be cooked in the pan, cut your herbolace into a round or square and eat it not too hot nor too cold”

Some oil, butter or fat for frying

A Tansey, Thomas Dawson’s The Good Huswifes Handmaide For The Kitchen; 1594:

‘To make Tansey. Take a little tansy, feverfew, parsley and violets, and stamp them all together. Strain them with the yolks of 8 or 10 eggs, and 3 or 4 whites & some verjuice*, and thereto sugar and salt and fry it.’

* verjuice is vinegar made from crab apples or unripe grapes.

‘For a Tansie. Take either walnut tree leaves or lettuce alone, or all other good herbs, stamp them and strain them and take a little cream and grated bread, nutmeg, pepper and sugar, 4 eggs 2 of whites. Beat them together and so fry it in a pan’.

‘Take either walnut trée leaues or let∣tice alone, or all other good hearbes, stampe them and strain them▪ and take a little Creame and grated bread, nutmeg, pepper and Suger, fower Egges two of the whites: beate them together and so frye it in a pan’.

To follow along and watch this recipe being recreated in Brigitte’s kitchen, click on the image below. If you’d like to find out more about Tudor Easter traditions, you can read my blog here. Good luck and enjoy! Have a lovely Tudor Easter!

The Art of Cookery in the Middle Ages, Terence Scully, 1995

Taste: The Story of Britain Through Its Cooking, Kate Colquhoun, 2007

The Goodman of Paris (Le Ménagier de Paris) A Treatise on Moral and Domestic Economy by a citizen of Paris, c.1393

The Domestic Herbal: Plants For The Home in the Seventeenth Century, Margaret Willes, 2020

Death in the Garden: Poisonous Plants and Their Use Throughout History, Michael Brown, 2018

A few weeks ago, I was lucky enough to get a sneak preview of the ‘Love’s Labour’s Found’ exhibition at the @philip_mould_gallery in Pall Mall. I chatted to Lawrence Hendra, Director of Research, and, together, we toured the gallery and learnt to decode four fabulous paintings of the period. ⁣
On this day in 1578, James Hepburn, 1st Duke of Orkney and 4th Earl of Bothwell died at Dragsholm Castle. It is said that his imprisonment in appalling conditions at the castle led to his insanity. So how did he end up at Dragsholm? ⁣
On this #tudortuesday, let’s have a look at one of my most loved Tudor places, Otford Palace. A building that witnessed many events during the turbulent reign of Henry VIII, Otford was one of the grandest houses in Tudor England. Tucked away in a rural west Kent village, a few miles south-east of Greater London, the building today is a ruin. ⁣
My latest podcast is now live! ⁣
If you’ve had a chance to listen to my latest podcast, you’ll hear me talking more about Clubhouse - the new and exciting place to connect. I’d like to invite you to join in the fun! Clubhouse is invite only, so if you’re on iphone and would like to get involved, as promised on the podcast, please put a comment below and we’ll start a chain of invites on here so we can get as many people on board as possible. BTW - I know many of you are on Android and are asking “When can I get on Clubhouse?” The latest from Clubhouse is that the android version is due to be released in May. So, there’s not long to wait!⁣
My new blog is now live! ⁣