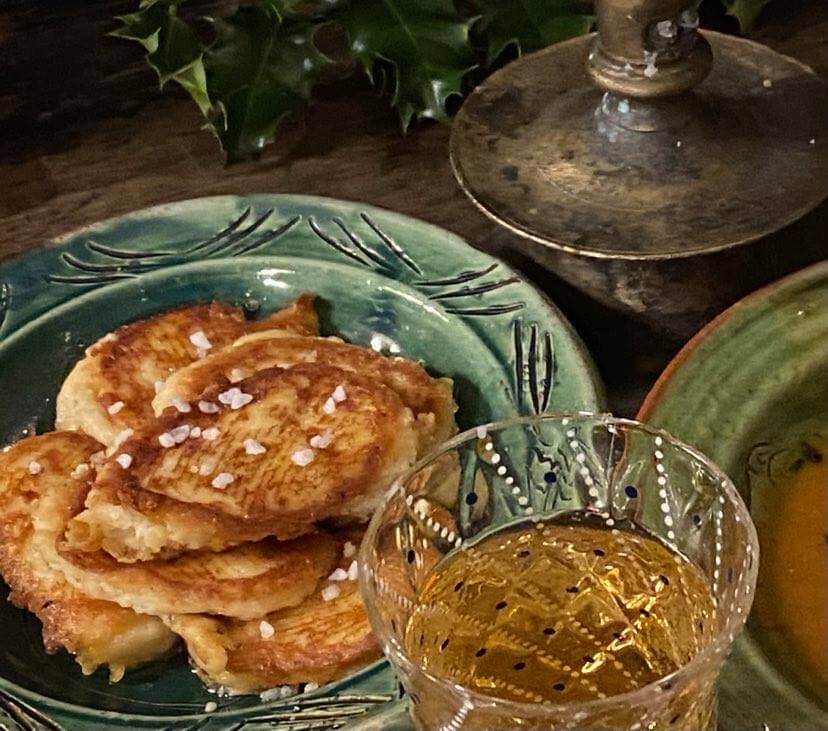 This month, The Great Tudor Bake Off focuses on a seasonal ingredient: parsnips. Harvested in January, parsnips are a nutritious root vegetable, rich in minerals, vitamins and fibre. Our chef at The Tudor Travel Guide, Brigitte Webster, shows us how to make Tudor Parsnip Cakes. They’re the perfect boost for your immune system. So, why not give them a try? After seeing Brigitte first making these Tudor Parsnip Cakes a while ago, they quickly became a favourite here at The Tudor Travel Guide. So much so that we put in a special request for Brigitte to put together this blog post and make a video for us – they’re too good for us not to share with you!

The Origin of Parsnips in Tudor Times

Parsnips are native to Europe and are a member of the parsley family. The root of the wild form (pastinaca sativa) is much thinner and woodier than the cultivated variety and can be mistaken for water hemlock – a source of poison that was apparently responsible for Socrates’ demise. In some instances, handling the shoots and leaves of parsnips can cause Phytophotodermatitis (PPD), an inflammatory skin reaction caused by contact with parsnip sap and subsequent exposure to sunlight.

Wild parsnips have been used for their sweet roots since ancient times and were esteemed as an aphrodisiac by the Romans. The Romans are believed to have grown them and the second Roman emperor, Emperor Tiberius, is said to have imported them from France, where the cool climate allowed the roots to develop a sweeter flavour. It is believed that he favoured parsnips so much that he accepted them as part of the tribute owed to Rome by the German tribes.

In England, the wild variety was first mentioned in 995 by Aelfric, followed by Neckham in ‘De Naturis Rerem’ in 1200, Bartholomew in 1240, Harleian 978 in 1265, Daniel in ‘De re Herbaria’ in 1375, Gardener in ‘The Feate of Gardening’ in the 1400s and Fromond in ‘Of Herbys Necessary for a Gardyn’ in 1525. However, it was only in the late Middle Ages that development of quality garden parsnips began and in Tudor England that they become a popular choice. There is some confusion as to whether the Latin term ‘pastinaca’, which loosely translates as ‘dug-out root’, refers to the parsnip or the carrot, as both of them were referred to as the same vegetable by Pliny. However, there is a recipe for deep-fried parsnips in the 1450 publication of ‘Libro de arte coquinaria’ by Maestro Martino da Como. In England, up until the seventeenth century, hardly any linguistic distinction was made between parsnips, carrots, parsley roots and skirret.

Parsnips and Health in Tudor England

In 1539, Thomas Elyot approved the parsnip as being nutritious in his book ‘The Castel of Health’. William Turner’s entry on ‘Sisaron’, his name for parsnips, in ‘The Nmes of Herbes’, 1548, states that they are common in England and that Leonhart Fuchs believes that parsnip is a kind of skirret.

In 1577, in ‘The Gardener’s Labyrinth’, Thomas Hill recommended sowing ‘parsnep’ in well-manured ground in high summer ready for eating during Lent the following year. William Harrison noted that that parsnips and other vegetables had become very fashionable and were served at the tables of merchants, gentry and nobility. The Shuttleworths preferred root vegetables to green vegetables, something typical of many northern counties in England. They reportedly grew so many of them that they were able to sell some.

Parsnips also feature in the books of Henry Willoughby, where they were reported to be purchased for the servants that remained at the house after his passing. Similarly, accounts for Wollaton Hall from 1597-98, list parsnips being bought for the servants during the autumn and winter months. In the late 1500s, herbalist John Gerard said parsnips provided more nourishment than turnips or carrots and that the nourishment was ‘thicker – but not faultie or bad’. He suggested wild parsnips were not fit for human consumption because of their woodiness but was convinced that appetising food or bread could be made from them. He categorised them as moderately hot and more dry than moist, therefore suitable for consumption by a wide range of people.

Parsnips were introduced to the Americas in the early seventeenth century by the British settlers in Virginia and Massachusetts (1609), and to Canada by the French colonists. According to ‘A True Declaration of the Estate of the Colonie in Virginia’, published in 1610, ‘parsneps’ were grown in Jamestown. In England, more so than elsewhere, parsnips remained a treasured vegetable for a long time. Nicholas Culpeper (1616–1654) described  the medicinal effect as ‘opening, diuretic, carminative, cleansing, and good for the bite of wild animals’ (probably as a cataplasm). Due to its effect on the urinary-genital system, he placed the plant under the rule of Venus. The big yellowish, nourishing, sweet root indicating that Jupiter was involved as well.  John Parkinson, in the early seventeenth century, dubbed the wild form of parsnip better than the garden cultivar.

Parsnips are sown in spring and harvested from late autumn until January. Their flavour is improved if they are in the ground when there is a frost, as this exposure converts the starchy root to sugar. Therefore, they are known to prefer a cooler climate, resulting in a sweeter flavoured crop. They are one of the few vegetables that can stay in the ground all through the winter and not suffer in quality or texture, making them an ideal vegetable for the long, harsh winter season in Tudor England. For those who could not afford sugar, they often acted as a sweetener. Parsnips were the ideal food during the forty days of Lent because they were filling and contained vitamins, minerals and fat. They had the added bonus of being suitable as fodder for the pigs and cows.

The holy hermit St Anthony the Abbot, patron saint of pig herders, also famous for his spiritual strength, helped to treat people suffering from ergotism. The condition was then associated with the saint, and it was later believed that eating parsnips could prevent you from catching the illness. In its wild form, in particular, the parsnip has been known as a healing plant and before 1500, parsnips were described as belonging ‘more to meat than medicine’. Also considered effective in helping women conceive, Leonhart Fuchs (1501-1566) wrote in ‘Neuw Kreuterbuch, published in 1543, ‘Drinking the cooked-out root provokes desire in married couples’. This was also recommended for depression, venomous bites and ulcers, according to Thomas Hill’s advice in his ‘The Gardener’s Labyrinth’, 1577.

Now, if you want to hear Brigitte talk about parsnips in Tudor England and follow along as she makes this recipe, click on the image below:

Spade, Skirret and Parsnip – The curious history of vegetables, by Bill Laws
Forgotten Fruits, by Christopher Stocks
Food in Early Modern England, by Joan Thirsk
Plenti and Grase – Food and Drink in a Sixteenth Century Household, by Mark Dawson
The Gardener’s Labyrinth, by Thomas Hill, 1577 (Chapter XXVII)
Cabbages and Kings: The Origins of Fruit and Vegetables, by Jonathan Roberts
Herball, by John Gerard,1597/1633
The Names of Herbes, by William Turner, 1548, Ray Society
Photo of original recipe, ‘Parsnip Cakes to Fry’ in Margarett Greene’s recipe book (f MS.1980.004), dated 1701, now held in the Clark Library collections
Modern measurements for this recipe from Cooking in the Archives by Marissa Nicosia