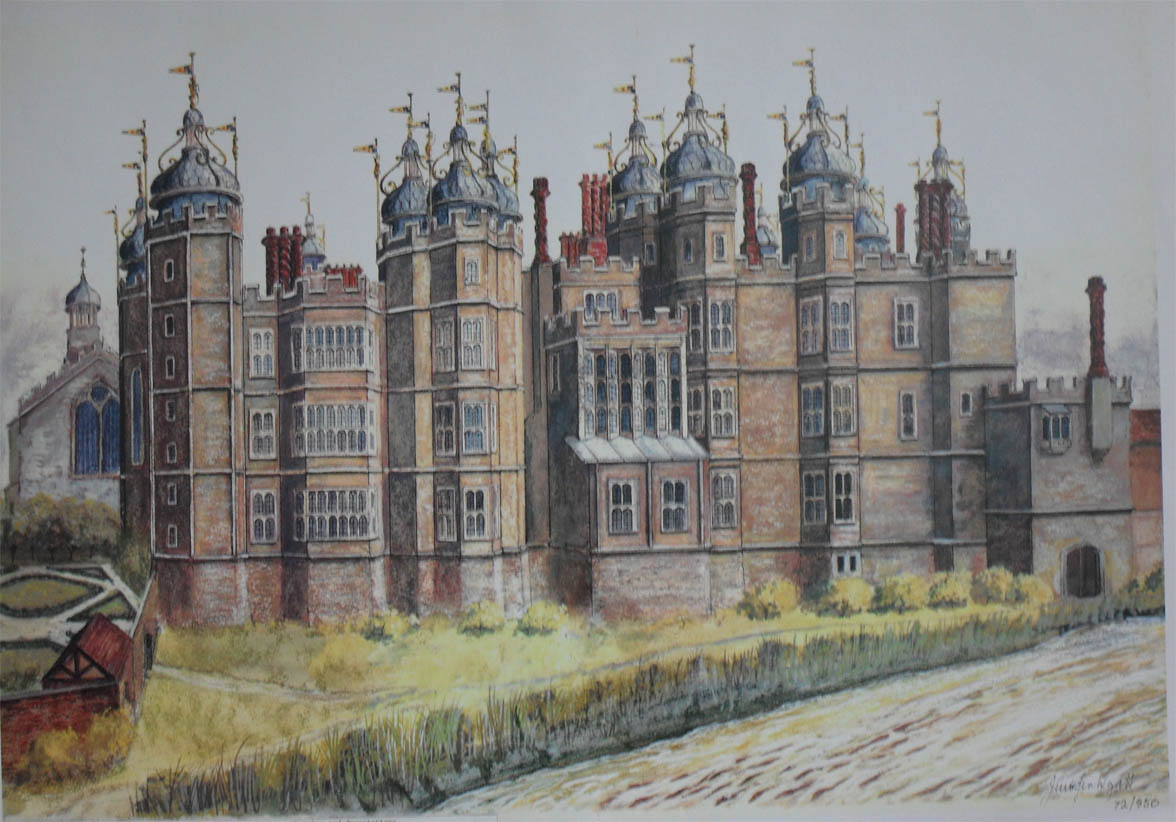 I have a confession to make; I have a teeny, tiny academic / historical crush on Mr Thurley! If you look at my bookshelf, you will see one of his earlier books, The Royal Palaces of Tudor England, is slightly battered looking, creased spine, curling at the edges of some of the pages etc. I used it extensively in my writing of Le Temps Viendra; a Novel of Anne Boleyn (affectionately known as LTV). In fact, I would say it was my first, and the most revealing, accounts of the places in which Anne and her contemporaries lived out their extraordinary lives.

Greenwich Palace from the River Thames

At the time, I poured over the plans in the back of the book, and in time, the places came to life in my imagination. It is not a word of a lie to say that it is in no small part due to Mr Thurley that even today, I could take you on a guided tour of many of most of Henry VIII’s lost palaces, room by room, and they would be as alive to me now as if they had just been abandoned by their royal owners…I think that might qualify me for status as a Tudor ‘anorak’!

It was through reading these accounts that I fell in love with the buildings that were the backdrop to all the tumultuous events of Henry’s reign.  I was smitten, so smitten in fact that, so far, at least 8 years of my life has been directed toward writing about the very same. Tons of architectural background detail went into LTV and then, in writing both In the Footsteps books, I unashamedly came out of the Tudor closet and made the buildings, the places themselves, the star attractions. For me, when I could colour in the detail of the palaces; their interiors, furnishings, room layouts, and how those rooms were arranged and used, the stories and the people became so much more vivid.

So, when I stumbled across Mr Thurley’s latest release, I positively swooned with excitement, and the ‘Buy Now’ button was pressed.

From my point of view, past publications of Simon Thurley have had a largely academic tone. There is no doubt, this one is a bit of a departure for the current doyen of Tudor architecture. It is much more accessible, more informal, somehow more chatty – and I loved it! Broadly speaking, Mr Thurley takes us on a chronological journey across the reigns of all the Tudor monarchs. As we go, he sets the historical context of the key events taking place, but then quickly moves into talking about the palaces, manors and lodges themselves.

Throughout the book, I felt he was trying to get under the skin of these places, and the thinking and influences that resulted in their construction or adaptation, as one owner came and went. At times it veers into informal and intimate and sheds a wonderfully different perspective on the public and private lives of the Tudor monarchs. As ever, expect to be enthralled by some very useful reconstructed plans and contemporary / near contemporary images of many of the key locations.

What is more, there were some lovely little titbits, which despite having done a lot of reading about the Tudor age, I was not aware.

Kenilworth Castle in Warwickshire, once a major Crown property, it was given to Robert Dudley, Earl of Leicester by Elizabeth I in the 1560s.

So, for example, I didn’t realise that as Master of the Horse, Robert Dudley was placed in the only household position where it was legitimate to touch the queen’s person. Now that makes sense! I always wondered why Elizabeth had tied the love of her life to the stable door. Nor did I realise that the carriage, as we know it today, really came into being during the reign of Mary I, and that, according to Thurley, when Mary travelled to visit Lambeth Palace, she was almost certainly the first monarch in England to wave at the crowds of 10,000 people from inside a carriage.

If I have one criticism, it is that although there is a broad flow through the book based on chronology, within each chapter the focus of the writing appears to meander from one building to another a little chaotically. So, for example, you won’t read about Whitehall Palace all in one place, the information is spread out across the entire book. However, once I embraced the sense of randomness, I thoroughly enjoyed every page. For me, this book is right up there as one of my favourite historical books of recent times. Highly recommended for anyone who has any kind of love or curiosity about the Tudor’s Houses of Power.

Although most people probably know me best as the former chief executive of English Heritage and director of the Museum of London, I like to see myself as an historian and archaeologist rather than an administrator. I passionately believe that our past informs and shapes our future, and that to make a great future for everyone we need to understand and care for our past.

Ever since I was a child I have been investigating history; some of my earliest efforts digging in my parent’s garden discovered important Roman remains. After reading History at university and completing an MA and PhD I have devoted my career to working with history, museums, archaeology and heritage always trying to explain why history matters.

Here is the book blurb from Amazon:

‘What was it like to live as a royal Tudor? Why were their residences built as they were and what went on inside their walls? Who slept where and with who? Who chose the furnishings? And what were their passions?

The Tudors ruled through the day, throughout the night, in the bath, in bed and in the saddle. Their palaces were genuine power houses – the nerve-centre of military operations, the boardroom for all executive decisions and the core of international politics. Houses of Power is the result of Simon Thurley’s thirty years of research, picking through architectural digs, and examining financial accounts, original plans and drawings to reconstruct the great Tudor houses and understand how these monarchs shaped their lives. Far more than simply an architectural history – a study of private life as well as politics, diplomacy and court – it gives an entirely new and remarkable insight into the Tudor world.

Buy the book on Amazon UK here, or Amazon US here.

2 thoughts on “Houses of Power: The Places That Shaped the Tudor World, by Simon Thurley”